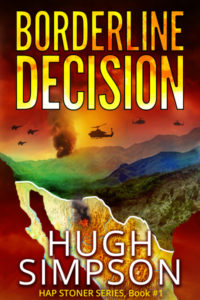 Borderline Decision is a fun read – I read it twice. The first time, I read it at a fast, exhilarating pace that matched the story. The second time, I read it at a slower, more leisurely pace that allowed me to better experience the unfolding of the story. The character of LTC Hap Stoner is a glorious action figure, living true to what he says, “Doing what is right and letting the man upstairs sort the bullshit.” The Scorpion character starts out as a memorable bad guy, but does not live up to his potential evilness. Stoner is a strong, powerful character and deserves strong, powerful adversaries, perhaps more powerful. Helicopter jargon is delightful and adds strength to the story even when the reader doesn’t always understand it. The remaining military jargon is pervasive and sometimes distracting. Thank goodness for the Cast of Characters and the Glossary. The plot line was energetic and suspenseful and surprises us when the story does not end when we think it will. To soften some of the military hardness, there are elements of affection presented through the Carla character and touches of the perverse through the Senator character. Overall, the strength of the story is Hap Stoner. I look forward to his next adventure. Military Writers Society of America – Read the full review here.

Borderline Decision takes you deep into daring black military operations you never hear about. The action is riveting and suspenseful. You’ll live it, feel it, and ask for more. Casey Demchak – Read the full review here.

This is one of the best book I have read so far – I so loved reading this book. The suspense is unstoppable. It is the best book I have read so far. It feels like you are inside the crucial scene from the story. It is mind blowing. Traitors are around us and even in the military evil are present unfortunately. Colonel Hap is a hero and willing to die to bring back his troupes dead or alive. If you are a fan of suspense and military story, this book is hard to resist and cannot put it down once you start reading it. My hats off to the author, this book is beyond five stars for me. Jessica C. – Read the full review here.

Amazing truth as fiction – I was privileged to read an early draft of Borderline Decision (an apropos title evoking several levels of meaning while capturing the essence of the story). I was sick in bed in Mexico and had to read it on my iPhone — I hate to read more than a short text on my iPhone, and I prefer words on real paper instead of Kindle and the like. Nevertheless, I was riveted by the story, which, if I am correct, fictionalizes what was an astounding series of real “borderline” events. When I finished the book, and the editor asked me what I thought of it, all I could say was, “Sometimes truth can be far more amazing than fiction. This puts Tom Clancy to shame!” – Robert C. – Read the full review here.

Straight Bacon – Well Done. Mr. Simpson did a very nice job of telling a story of a corrupt self serving Washington Politicians and a Brutal drug cartel who all seemingly operate beyond the reach of justice. He provided the reader with well developed characters in a fast paced….action packed story. His experience as a Marine Aviator provides the reader an amazing insight to what it may be like in a military attack aircraft. James G. – Read the full review here.

Here we have the introductory volume to a new series – Our hero and chief butt-kicker is Marine Reserve Lieutenant Colonel Hap Stoner. Stoner runs a successful business in his civilian life and flies’ AH-1 Huey Cobra helicopters for the Marines. This is a story of Marines aiding in the support and monitoring of our southern border to Mexico. Perhaps not so much in the capture of illegal aliens crossing our border but in the interdiction of drug smuggling and the slave trade. During an unusual firefight between Cartel and U.S. Forces, several Marines are killed and/or wounded with one Huey Cobra going down resulting in the capture of Colonel Chuck Warden. The story then focuses on the political wrangling, deception, and corruption of both governments in an effort to hide the truth. Stoner organizes an illegal rescue mission in the name of “No Marine is left behind”. The action is fast-paced and believable, and the characters well defined. Hap Stoner is a bit bigger than life but that’s normal for this type of tale. RJ – Read the full review here.

Awesome book that I didn’t want to put down – I knew as soon as I opened this book, that I would not want to put it down. As a veteran of The United States Navy, I knew and understood all of the terminology and military references, which made this book so interesting to me. I worked in Aviation, in a squadron and the lingo/military talk was spot on. You could really tell that the author knew his military information. I think that for a civilian, without prior military experience, they could potentially have a bit of a time understanding the book in the beginning. I also think that having a large list of characters can seem a little complicated but if you just continue reading and not focus on that right away, then you get to know the characters. I loved the buildup and thrill when it came to Hap Stoner, a helicopter pilot, who goes on a mission to rescue a high ranking commander from a drug cartel called The Black Stone Mexican. Overall, I thought this book was a great read. I felt at times that I was in the book actually seeing action take place in front of me. As a former service member, I think it is important for civilians to read books like this to really get a grasp on events that take place on deployments, missions, and detachments. I think that reading a military book helps non military readers to understand why it is so important for the military to have their own lingo and how important it is also to protect our military personnel by using operational security. This book really shows the step by step procedures in rescue missions and war like conditions. I was so enthralled with this book that I had a hard time putting it down. I’m so excited about reading the rest of the series and consider this an excellent book that I would highly recommend to anyone. Mandy – Read the full review here.

Fantastic! – “Never leave a brother behind” is a very familiar phrase to this military spouse and the concept of this fictional story. My husband served 20 years in the army and I can’t help but love this book. I love to read about reality versus perceived reality. Unfortunately, the vast majority of the population has no concept of military and government operations. This book, with the author’s military knowledge helps to enlighten readers that are unfamiliar with this very important subject. Many may find parts of the book unrealistic, fictional, but I can all but guarantee that so many things similarly related to events in this story have happened without general public knowledge. Being married to a man that survived 13 overseas deployments as a special operation aviator and not being allowed to know the details surrounding his tours makes me realize how much the truth really must be somewhere in the middle from what we are told and what we think we know. I can’t wait for the next book in this series and highly recommend it to all readers who want a eye opening experience. Allison D. – Read the full review here.

Buy it! I could NOT put it down and was depressed because it was the ending – This book is everything you’d want in a novel. Mr Simpson is such an extraordinary writer and he truly made me feel like I was in the chopper, in the ready room, in the bar and in the rough terrain. He has a way of engaging the reader that I’ve not experienced in many years…and I read constantly! I am so excited for the rest of the Hap Stoner series and hope they make a movie from this book. It would be a blockbuster!!! Flyn4fun – Read the full review here.

This is one of the best book I have read so far – I so loved reading this book. The suspense is unstoppable. It is the best book I have read so far. It feels like you are inside the crucial scene from the story. It is mind blowing. Traitors are around us and even in the military evil are present unfortunately. Colonel Hap is a hero and willing to die to bring back his troupes dead or alive. If you are a fan of suspense and military story, this book is hard to resist and cannot put it down once you start reading it. My hats off to the author, this book is beyond five stars for me. Jessica – Read the full review here. 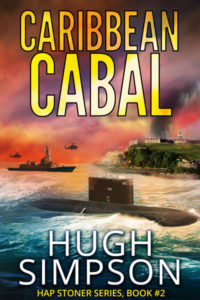 Riveting second book in Hap Stoner Series! – The follow up book to Hugh Simpson’s Borderline Decision is fantastic. Chapter 1 sets the stage for an exciting dive into another geopolitical thriller. Hap Stoner and Will Kellogg are amazing characters! Sara B. – Read the full review here.